The Mother Teresa also known as the Blessed Teresa of Calcutta was in fact a Roman Catholic Sister who also served as a missionary, born in Albania but mostly lived in India where she was best known for her charitable works and still is.

Mother Teresa founded the Missionaries of Charity, a Roman Catholic congregation, which consists of more than 4,500 sisters and works across 133 countries. This amazing organization run hospices and provides homes for people having HIV/AIDS, tuberculosis and leprosy, who are the people which society does not accept. For her numerous charity works and devotion of her entire life for the betterment of others, Mother Teresa was given several honors which most includes the prestigious Nobel Peace Prize of 1979.

Although Mother Teresa was mostly admired for her charitable works, she was also criticized mostly due to her campaigns which were against the concept of contraception. Another reason for which she was criticized was for providing substandard conditions in her hospices. Besides these criticisms, most people still loved her for her wonderful works and the help of the poor and the ill.

She was recognized by the Indian government in 1962 after she was given the Padma Shri award. She was also the recipient of many other major Indian awards which also included the country’s highest civilian award Bharat Ratna in 1980. Not only in India, but in the rest of the world as well she was the recipient of many awards and was admired by many people who loved her and wanted to support her noble cause. Here are some of the Mother Teresa Quotes.

–
–
” Be faithful in small things because it is in them that your strength lies. “

” Spread love everywhere you go. Let noone ever come to you without leaving happier. “ 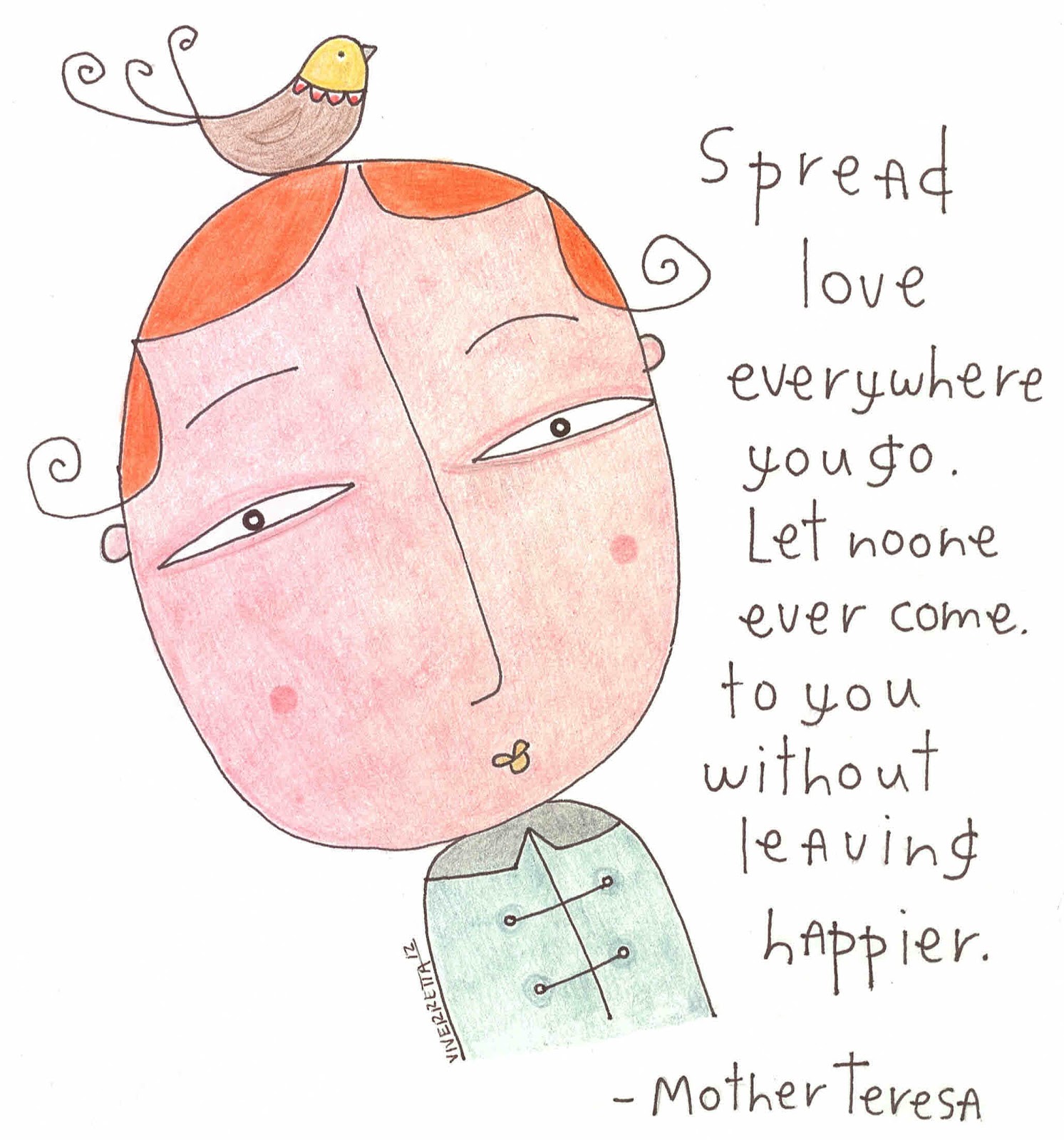 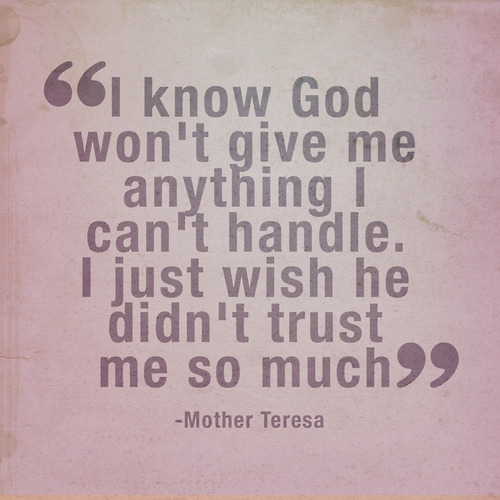 –
–
” People are often unreasonable and self-centered, forgive them anyway. If you are kind, people may accuse you of ulterior motives, be kind anyway. if you are honest, people may cheat you, be honest anyway. If you find happiness, people may be jealous, be happy anyway. The good you do today may be forgotten, do good anyway. Give the world your best and may never be enough, give your best anyway. For you see in the end it is between you and God. It was never between you and them anyway. “

–
–
” I alone cannot change the world, but I can cast a stone across the waters to create many ripples. “

–
–
” We ourselves feel that what we are doing is just a drop in the ocean. But the ocean would be less because of that missing drop. “ 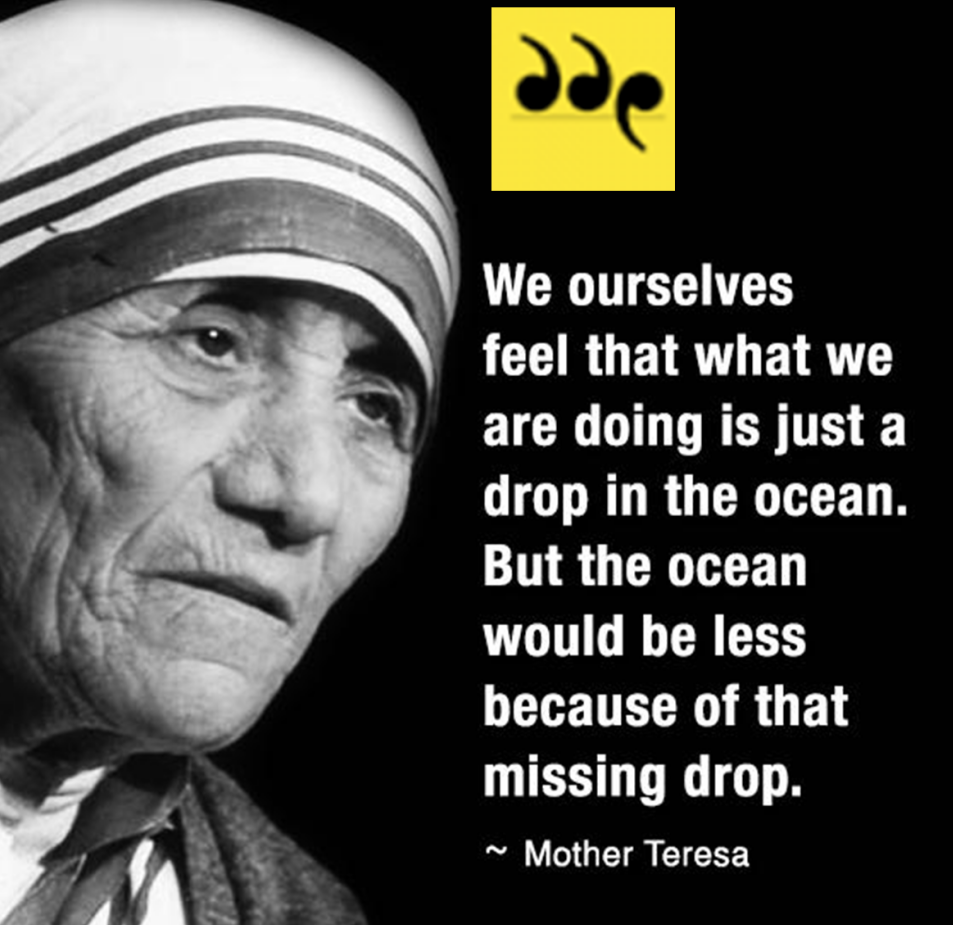 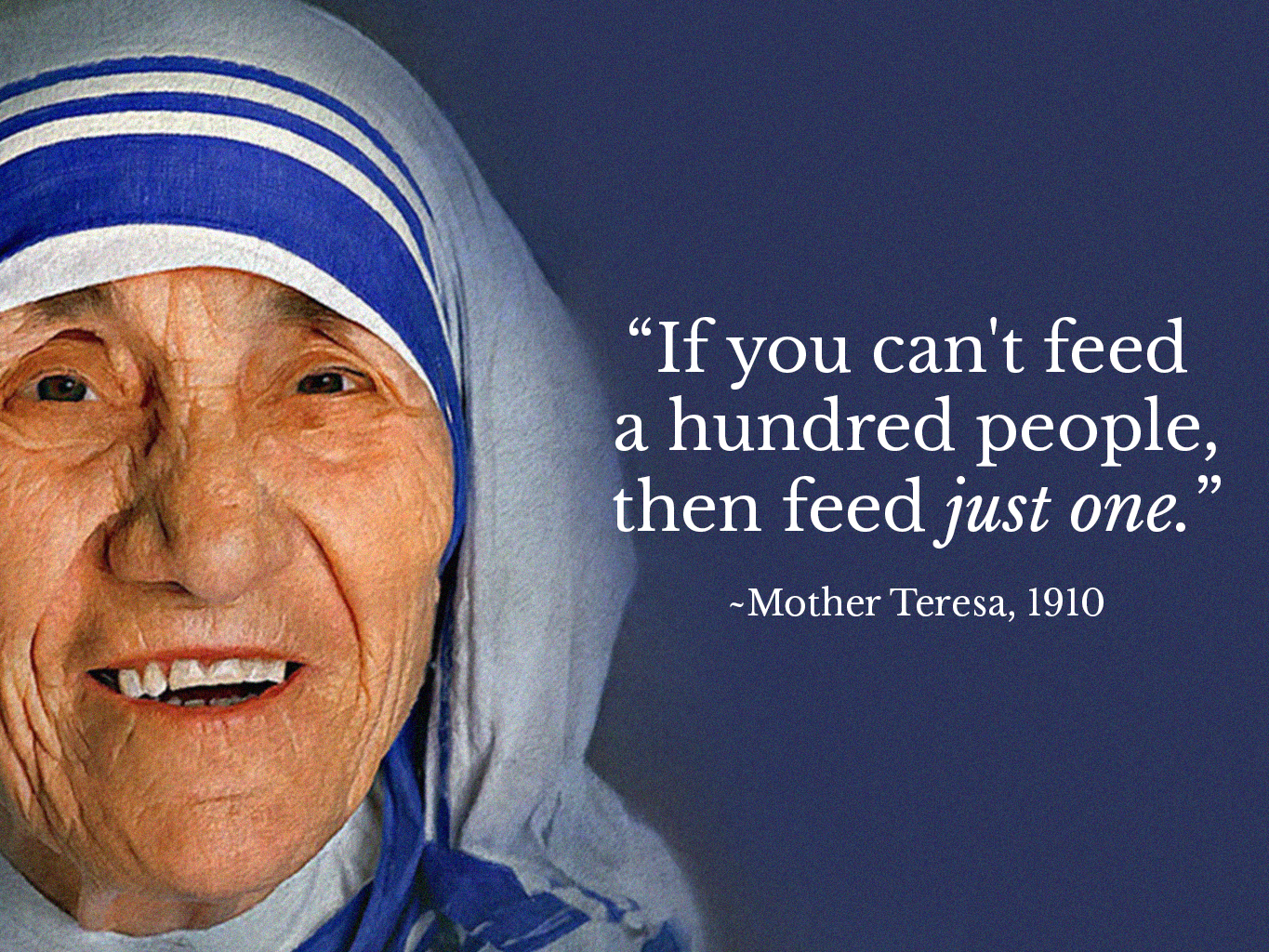 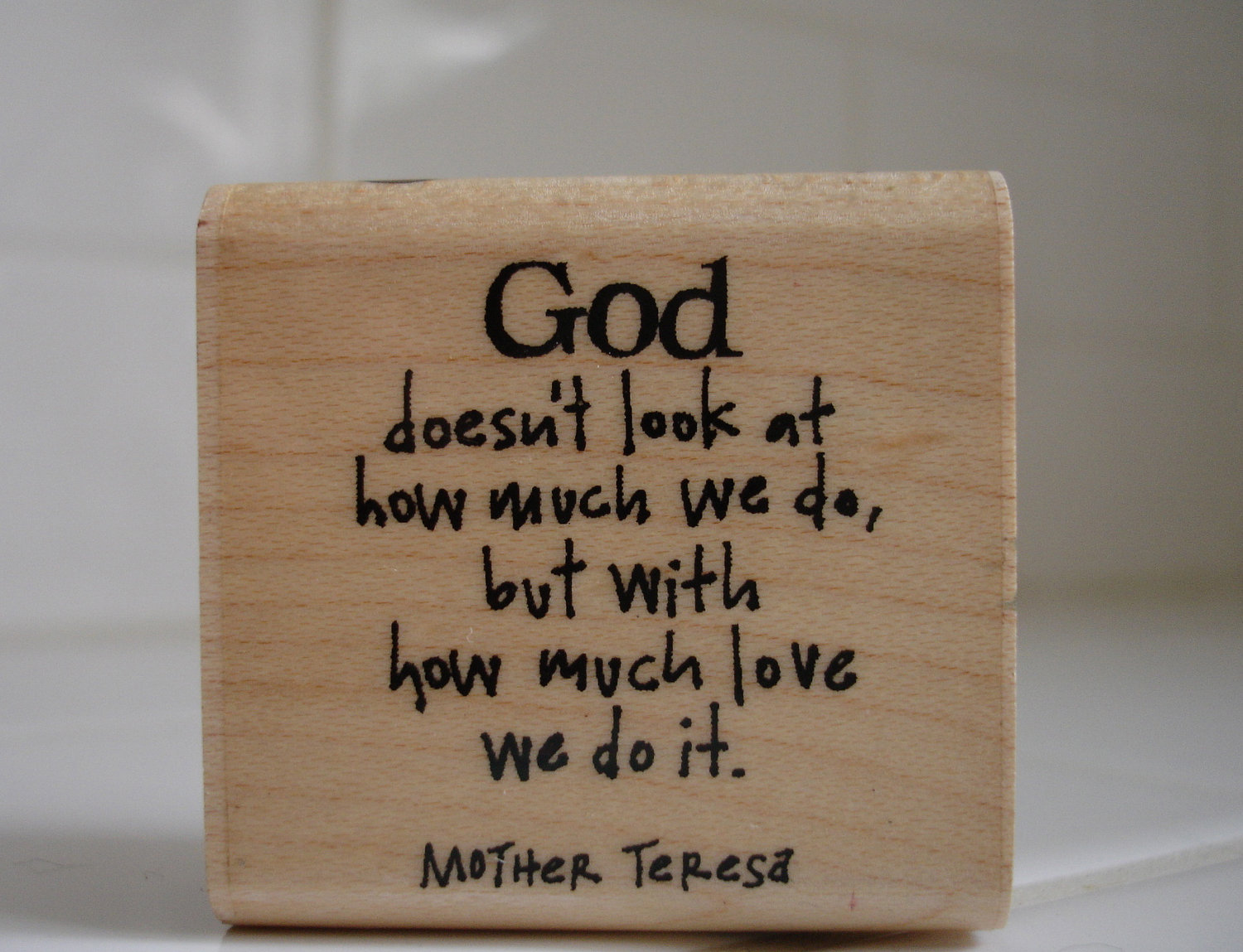 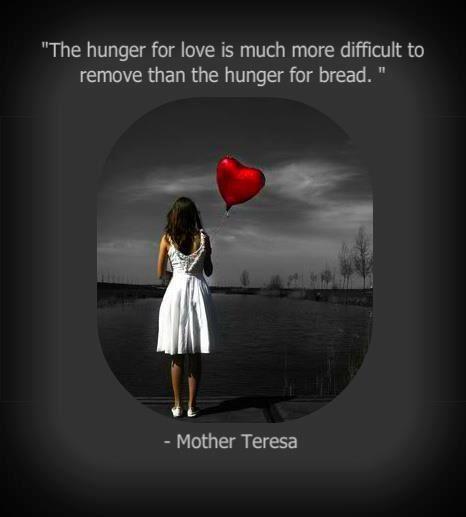 –
–
” If you are kind, people may accuse you of ulterior motives, be kind anyway. “ 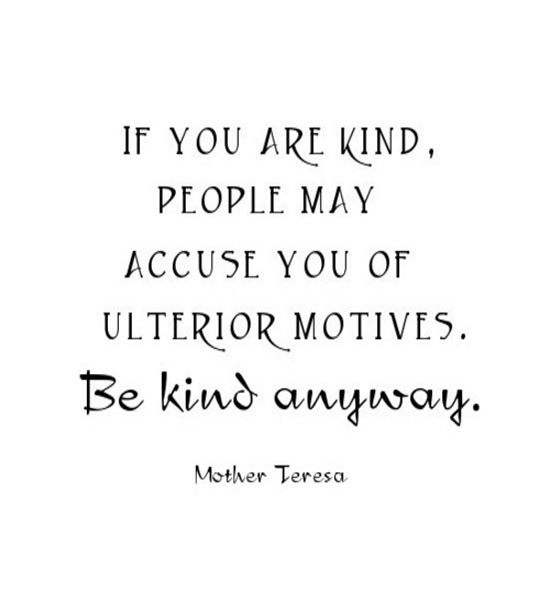 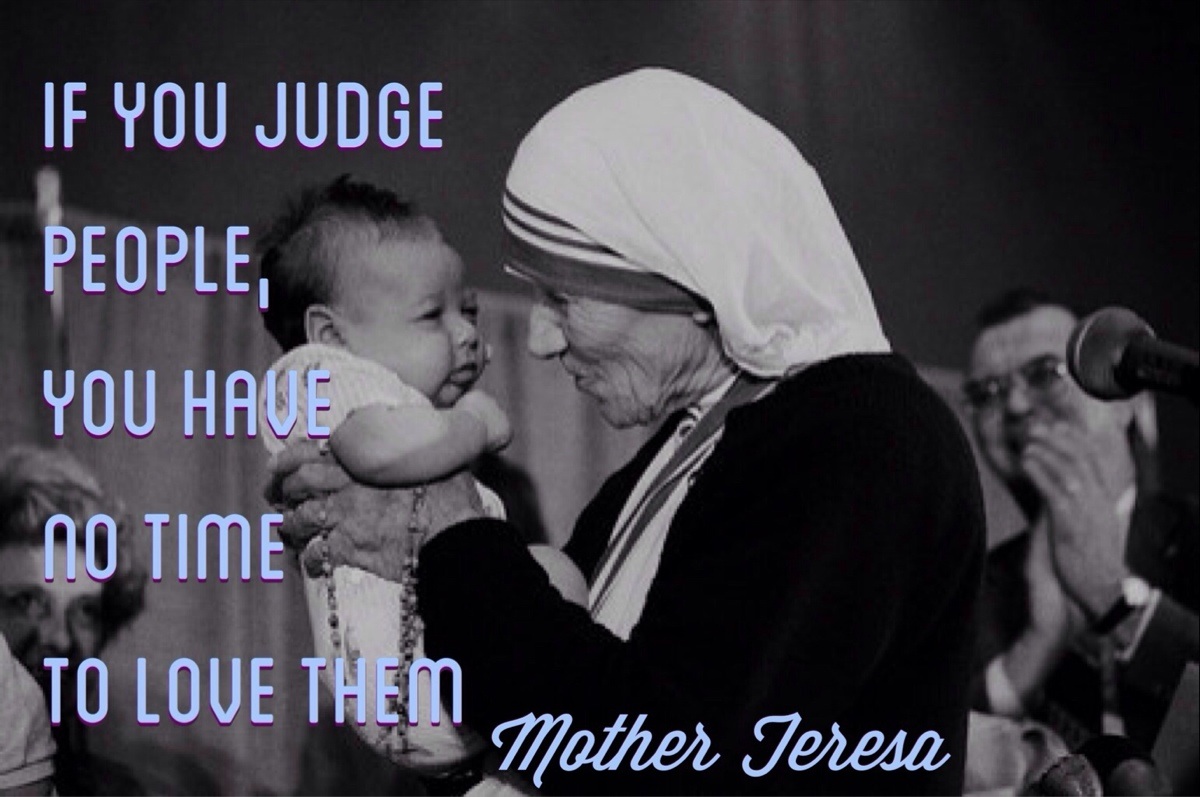 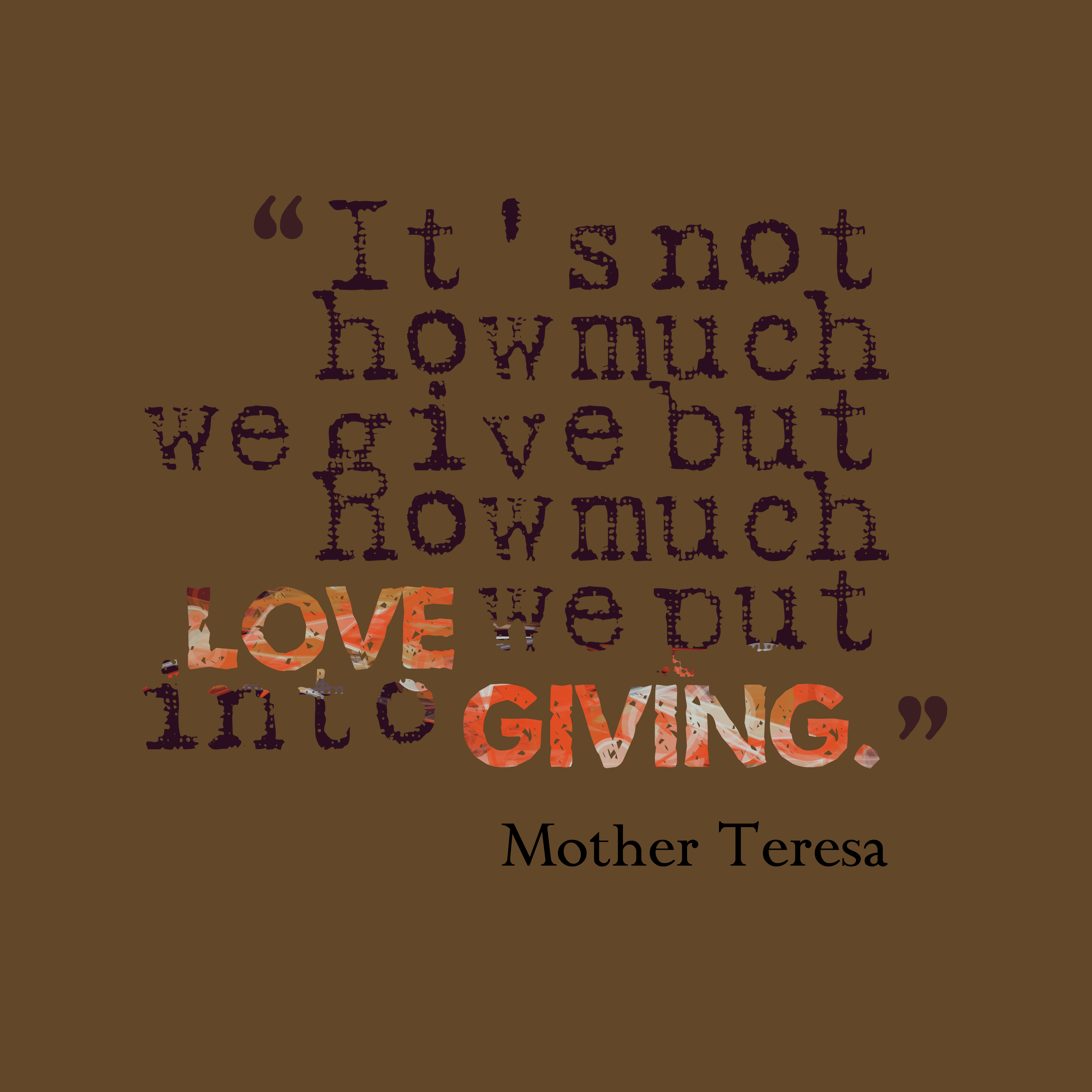 –
–
” Kind words can be short and easy to speak, but their echoes are truly endless. “ 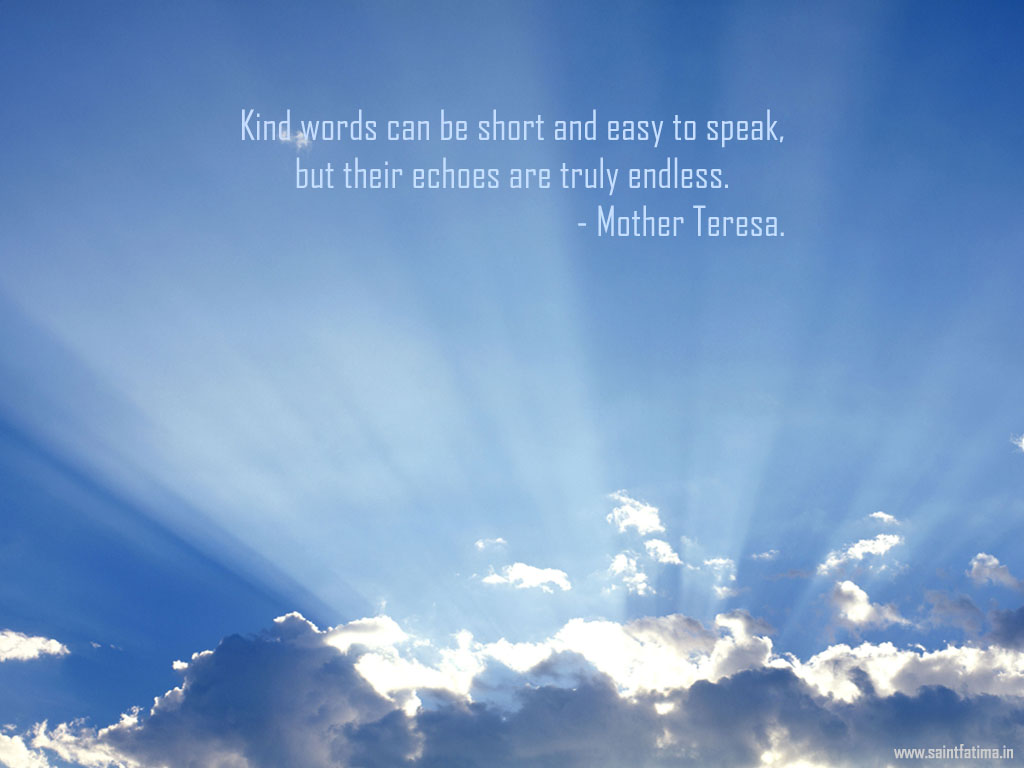 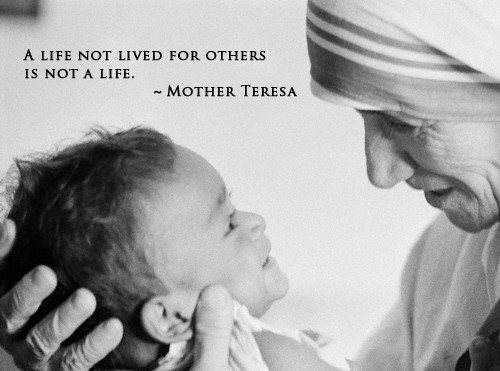 –
–
” Love begins at home, and it is not how much we do but how much love we put into that action. “ 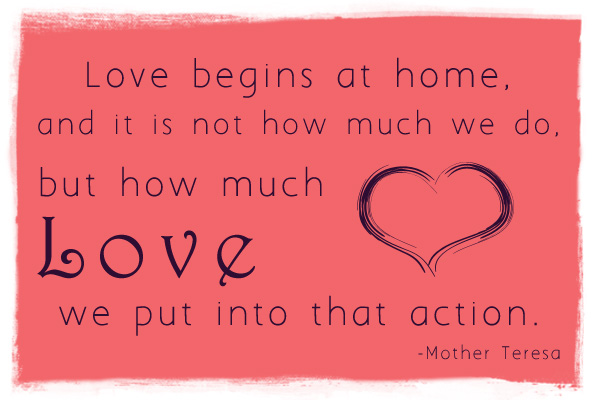 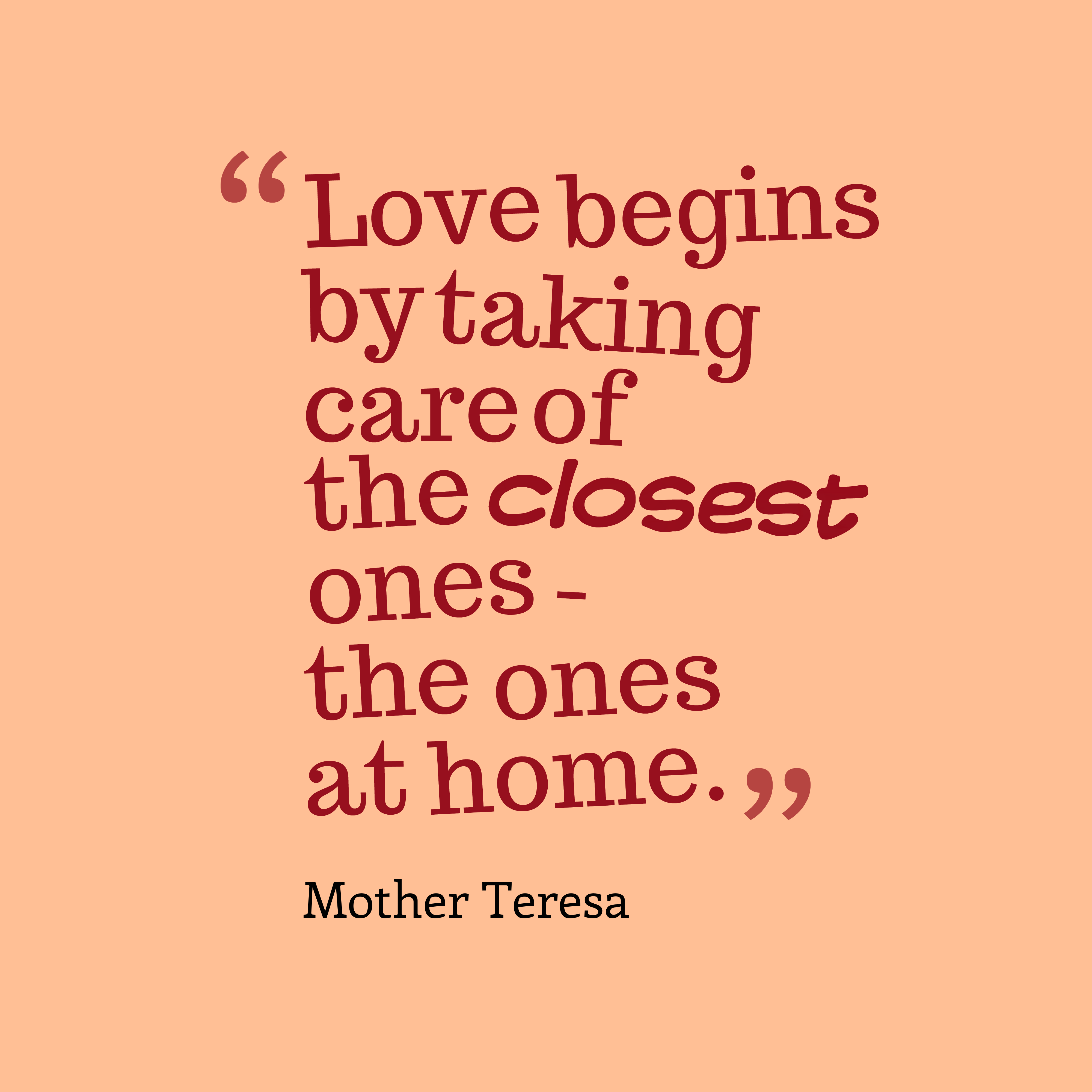 –
–
” I am a little pencil in the hand of a writing God who is sending a love letter to the world. “ 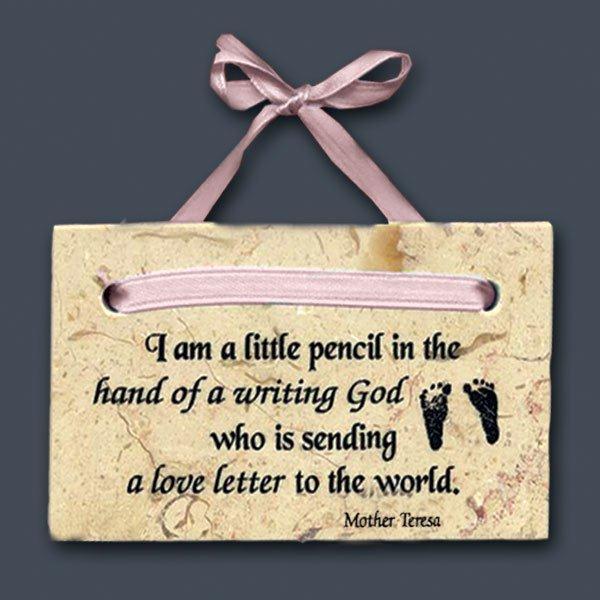 –
–
” I have found the paradox, that if you love until it hurts, there can be no more hurt, only more love.” 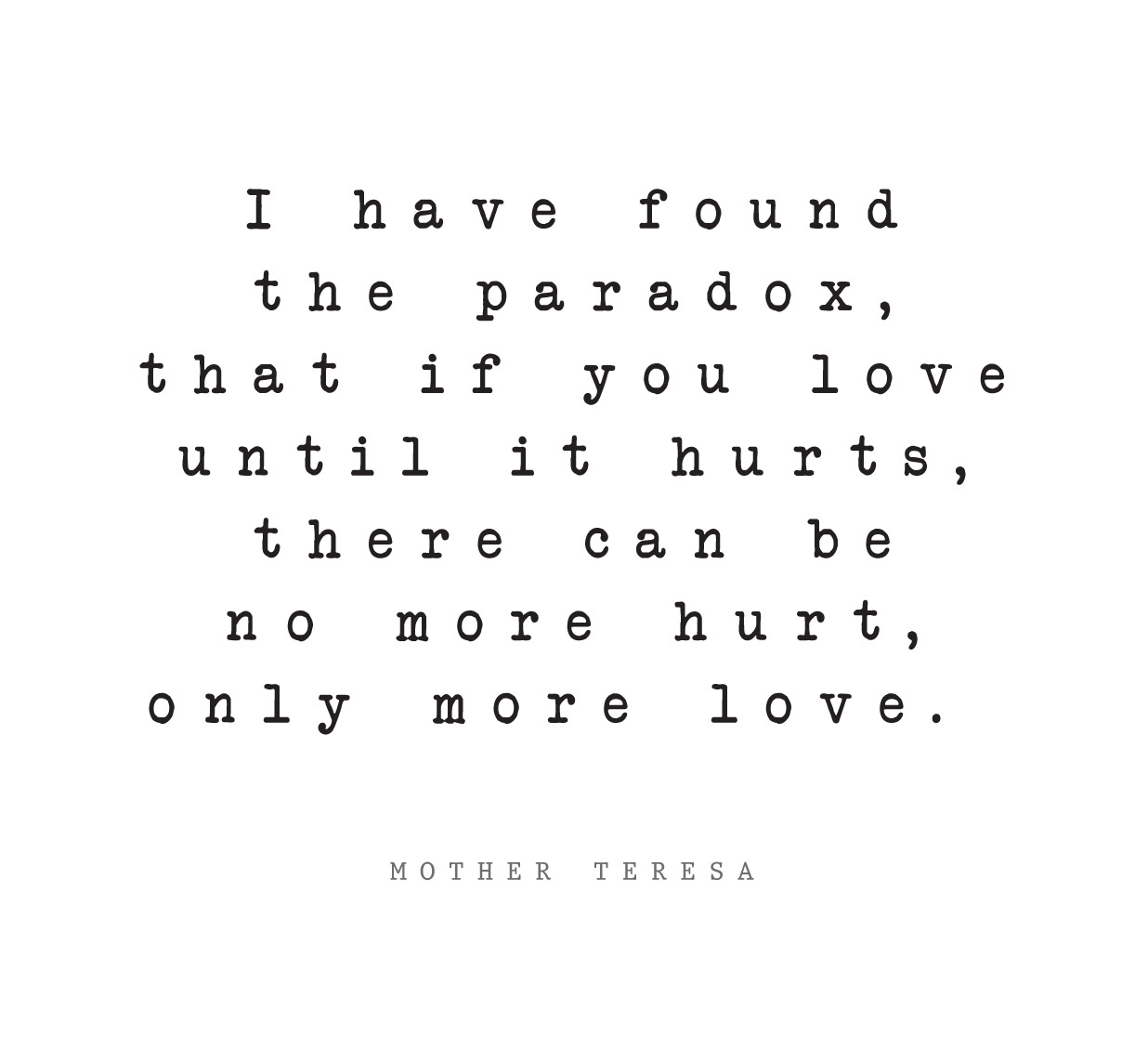 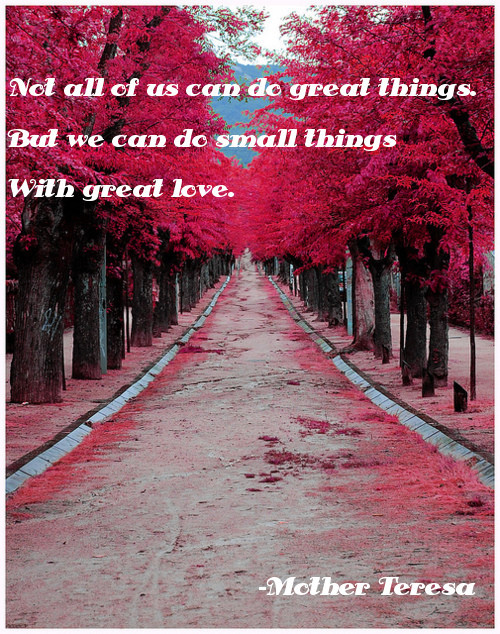 –
–
” When a poor person dies of hunger it has not happened because God did not take care of him or her. It has happened because neither you nor I wanted to give that person what he or she needed. “

–
–
” Being unwanted, unloved, uncared for, forgotten by everybody, I think is a much greater hunger, a much greater poverty than the person who has nothing to eat. “ 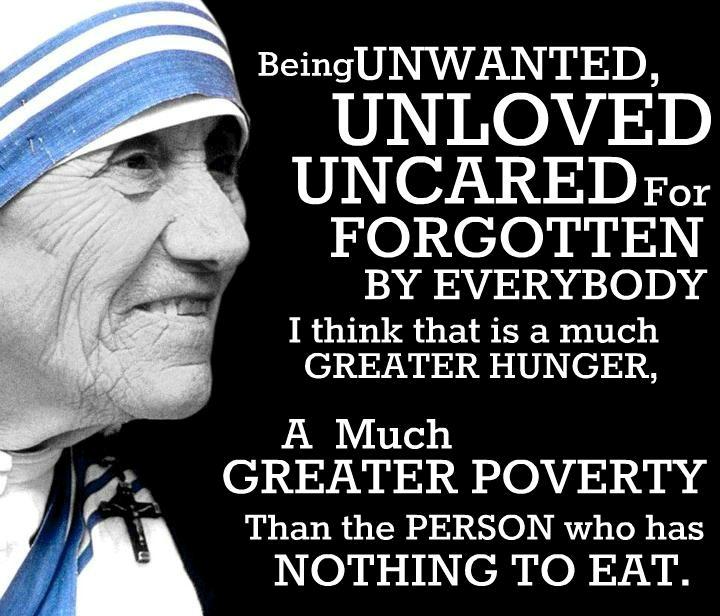 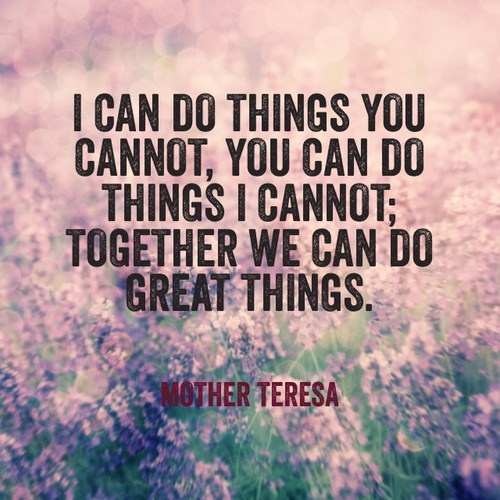 –
–
” In this life we cannot always do great things. But we can do small things with great love. “ 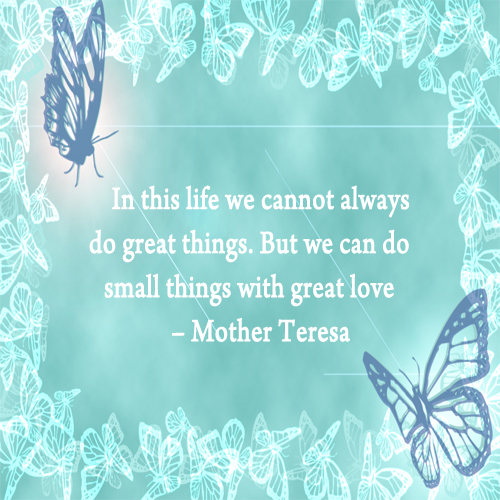 –
–
” We know only too well that what we are doing is nothing more than a drop in the ocean. But if the drop were not there, the ocean would be missing something. “ 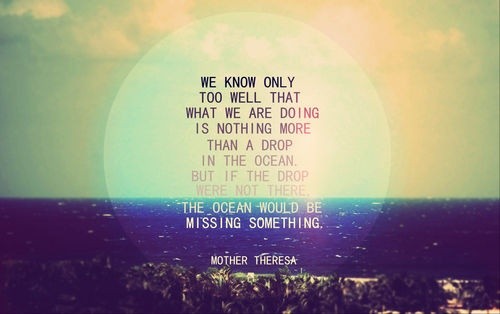 –
–
” At the end of our lives, we will not be judged by how many diplomas we have received, how much money we have made or how many great things we have done. We will be judged by ‘ I was hungry and you and you gave me to easy. I was naked and you clothed me. I was homeless and you took me in ‘. “

–
–
” Let no one ever come to you without leaving happier. “ 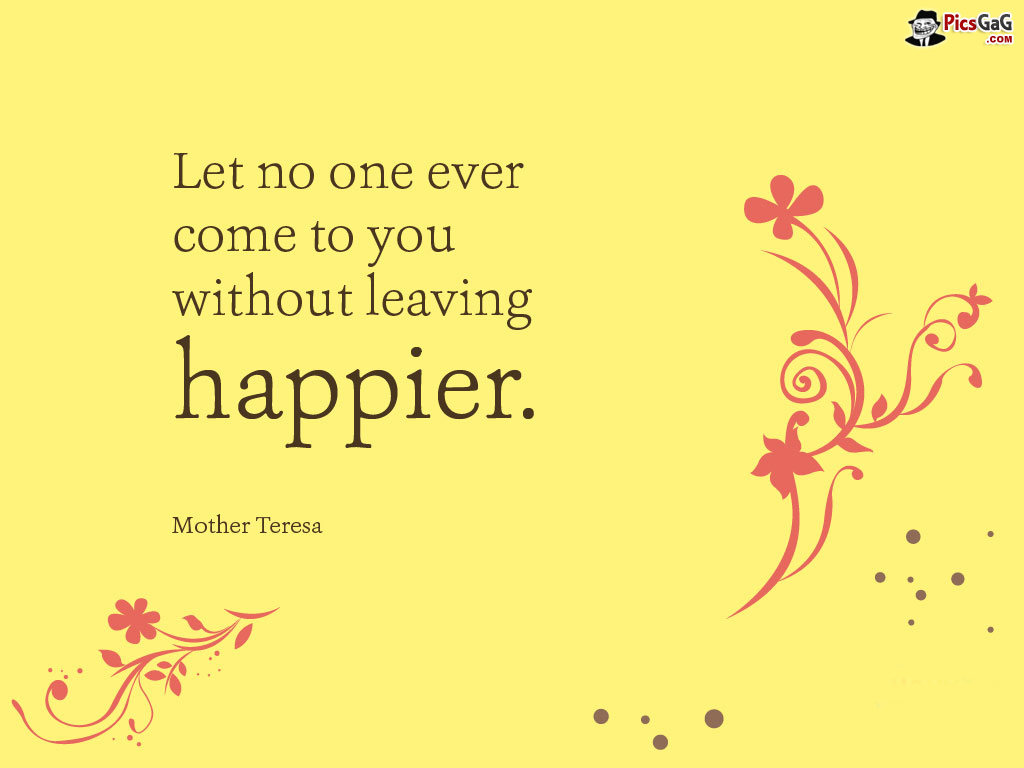 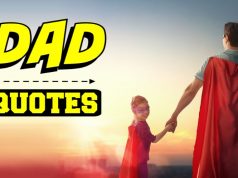 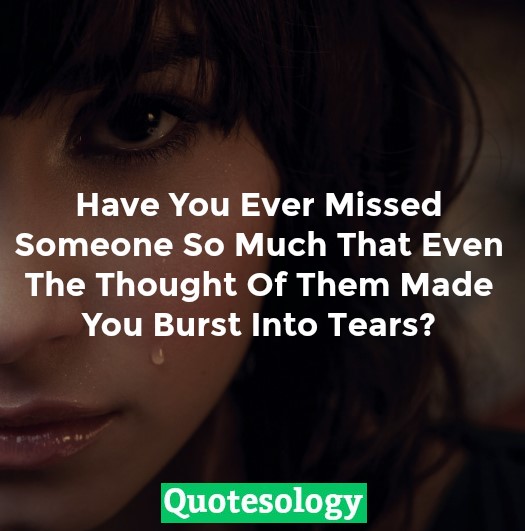